) and must admit I’m impressed to bits with them. The original reason for wanting them was to make George Washington Sears “Nessmuk” style field knives from them. They have 1095 Carbon steel 7” skinning blades, roller marked, with a tip that turns up high to a full 90 degrees –these are impressive blades. The handles are a dark hardwood and stamped Old Hickory (no…they aren’t hickory…). OH is a trade name of Ontario Knives (confusingly a manufacturer.) A pleasant surpise was the blade grind -it's not hollow ground but rather a sabre-grind with flats like a Scandi. I thought I would have to do that myself but its already done.

These knives cost peanuts in the (mine were on special for $6.47 (yep - $6.47!), though a bit more time, effort, co-operation and money was required before they bumped on the doormat in Fyvie (Thanks again S!

I was going to rehandle and regrind these to make a pair of fairly fancy Nessmuk’s, but thought I’d see just how simple the conversion could be since the existing handles have a very “period” feel for turn of the (20th) century knives. So #1 at least is a bare minimum with its original handle. I might curve the blade clip just a little more than it is right now, but better too little for now than straight to too much. Removing steel is easy, putting it back is…er…not.

Schwert suggested I photograph the conversion, and that’s what this thread is. My camera sadly is a bit basic –but the gist should be clear. Unfortunately my macro setting doesn’t allow enough stand-off to get the whole knife in on macro, while the non-macro has a closest focus of about 3’. Still, here goes.

Right, here is the blade of the Old Hickory Skinner against a Dale Chudzinski Nessmuk (thanks SSJ

) that I’m using as my reference model. 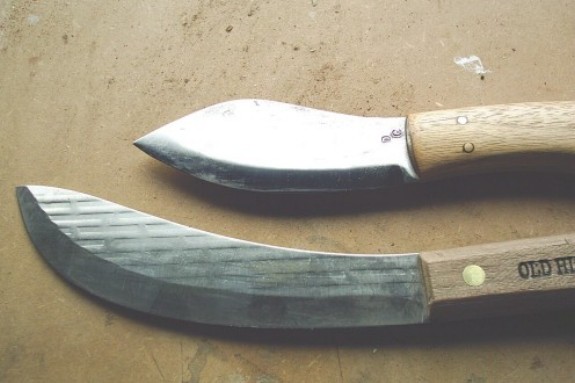 I’ve just put a piece of masking tape on the Skinner blade and quickly drawn two lines. A straight one for the first cut and a curved one to get the “final” shape impression. 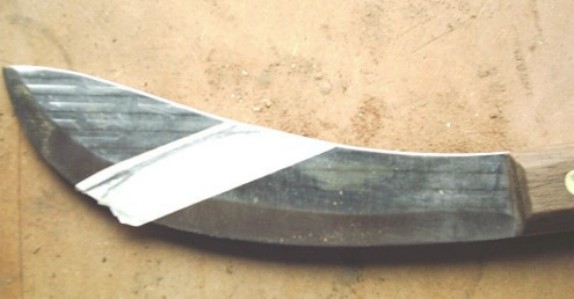 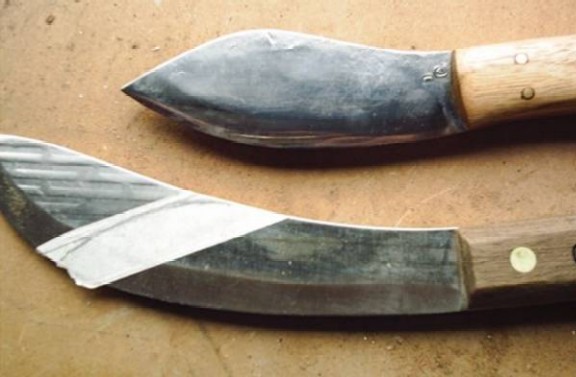 The straight cut will be made with a diamond cut-off wheel in a budget B&Q Dremel wannabe. To preserve the heat treatment throughout I’ll cut it in a bucket lid filled with cold water. That’s the grubby round thing… 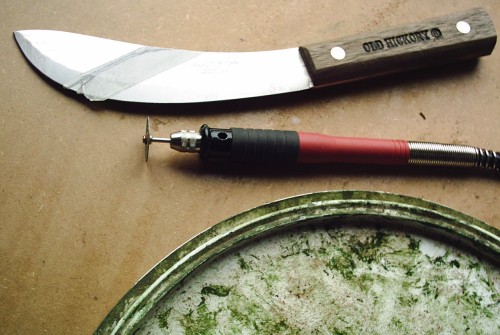 Halfway-ish. No sparks, no heat. Fair bit of light water spray but a very painless operation for me (the patient might beg to differ). 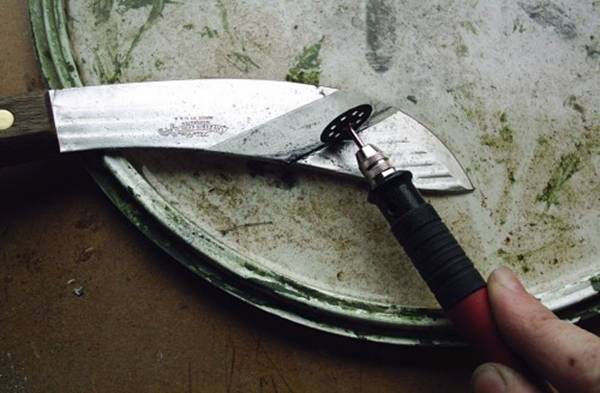 Hmm…a bit for the tooth fairy 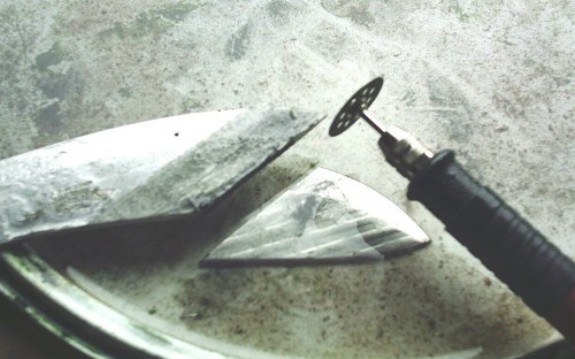 Scimitar anyone? That’s the chop cut complete. Took all of 10 minutes with a few stops just to be on the safe side but nothing got even remotely warm and the cutting wheel lasted. 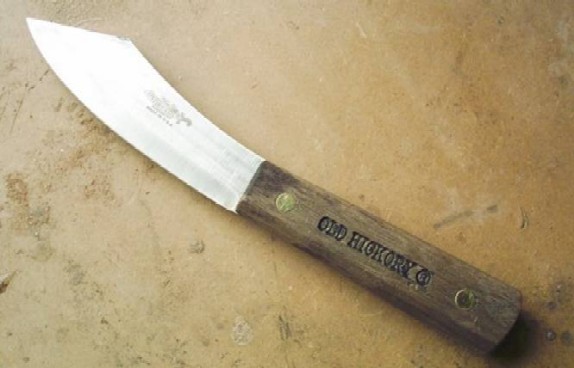 Here’s the first cut against the DC Nessmuk for comparison. 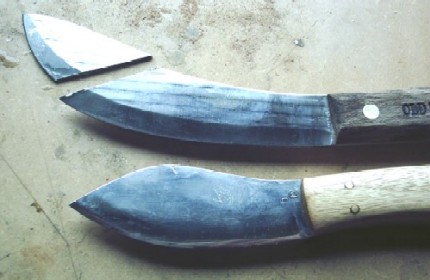 And here’s the curve line for grinding to final shape. Again just masking tape and pencil. 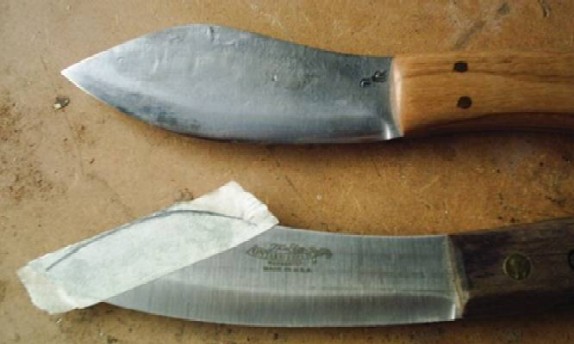 To grind the blade I have a cheap (£24.95) Wet and dry whet/grinder from Wickes. I use this a fair bit for cold chisels and axes and now for blade profiles (though this isn’t the first….umpteen Opinels, a Shing Skinner and several other scandie blades and tangs have fallen to it so far). Sorry about the focus… 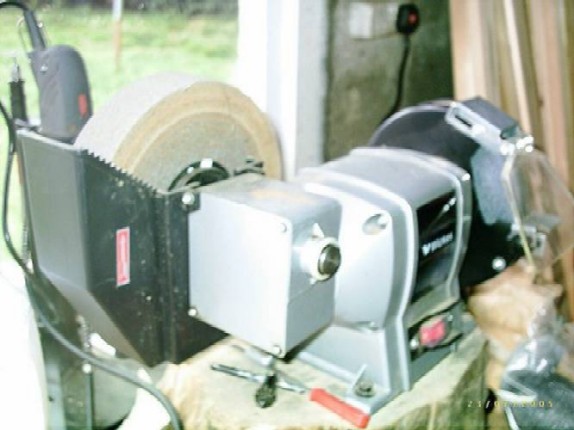 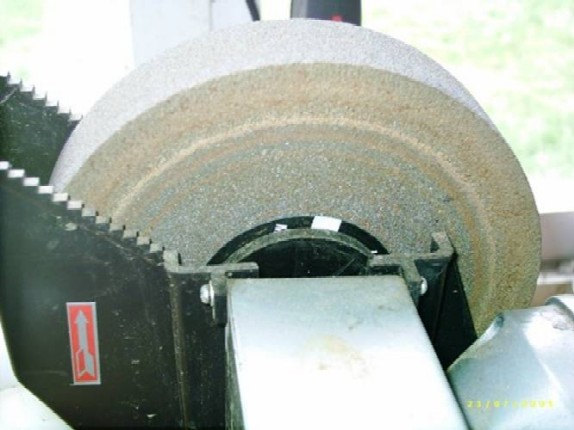 Right, curved grind complete. I dressed the spine a bit with a medium lansky stone that gave me a finish to match the original untouched spine. This is the end of the simple conversion. Total time on the bench about an hour. No HT complications and no fancy finishing. Its obviously not in the same league as DC’s work but I have a suspicion GWS might have approved.

I have another Skinner and might treat this one to a new handle…then again …
I’ll leave you with a before and after shot. Then start thinking about a sheath. 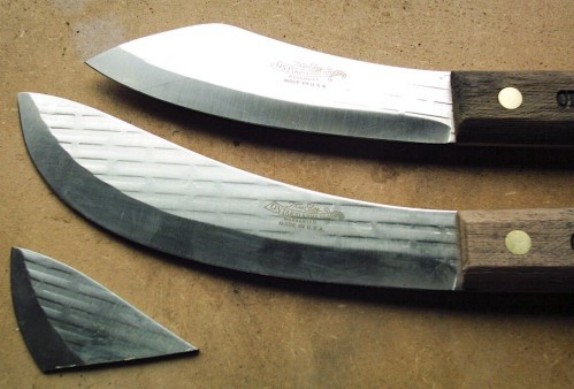 Many thanks to Basemetal for this article - GB